Well, to get me on the road to blogging again following the lull due to the festivities at the end of 2013, I have decided to show you a simple card I first made about 15 years ago but only finished just recently with one of the massively versatile Visible Image stamps.

No word of a lie, I made this card in my early card making days, when mulberry paper was the most exotic thing out there! To be honest I made quite a few in this style as I tended to make cards on a production line. They sold well to my friends and work colleagues but there were a few left which ended up in my box called 'Re-Workers' partly because the glues etc had started to misbehave but the main problem with them for me was the C6 format, so obviously 'home-made' that I was now embarrassed about them. Made to fit the only coloured envelopes you could get your hands on.

Anyway, during a day of purging (I had reached that point known as 'SABLE') I came across these cards and decided to try and give them a second chance. The design was not a problem, I still liked the rustic, ethnic nature of them, it was just their shape!

The first thing I did was to give them a decent card base. Still keeping to the brown craft card colour but square. It was easy to dismantle the 'topper' as it was tied onto the card with raffia. I re-cut the edges of the coffee stained mount (yep, it is real coffee!!!) and used distress ink on the edges. I then used the Visible Image stamps from the Ink Splats set to enhance the coffee stained mount. I salvaged some more beaded wires from another card to beef up the decorative element and added a word. Hey presto! A second chance for an old friend!

Hope you like it? Hope you are inspired by it. Just because something is old doesn't mean it has to be forgotten!

And while I have your attention, have you visited Visible Image on their blog? Did you know they run a monthly challenge with PRIZES? You could win a voucher to spend in their online shop! If you want to see more of the fantastic things you could make using their stamps pop over to their Facebook group to be inspired!

Looks like you will have plenty to do today following all those links! I'm sure you will think it is worth it!

Take care. And if you are wondering what SABLE is I would imagine most of us are at this point, some of you will reach it soon and others need to know it happens all too easily! 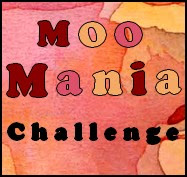