If you don't like Mondays then maybe this little card I made using Cosmic Shimmer Sparkle texture paste will bring a little shine to your day! Well, when I say a little I actually think you will find there is rather a lot!

It has been a very busy week in St Dogmaels. It was Carnival Week and boy were there a lot of things going on. My priority for my very first week as a member of the village community was to make sure my house was suitably decorated. So I made bunting! What do you think? Just one row this year along the garage wall.

I am quite pleased with the result but I intend to make more for the next village event which is in September, the Village Show. It is the sort of show that has competitions for the best jam, best runner bean, longest carrot, etc.

Anyway, on to my Creative Expressions make for today, sorry to ramble, but it is what I do best!! 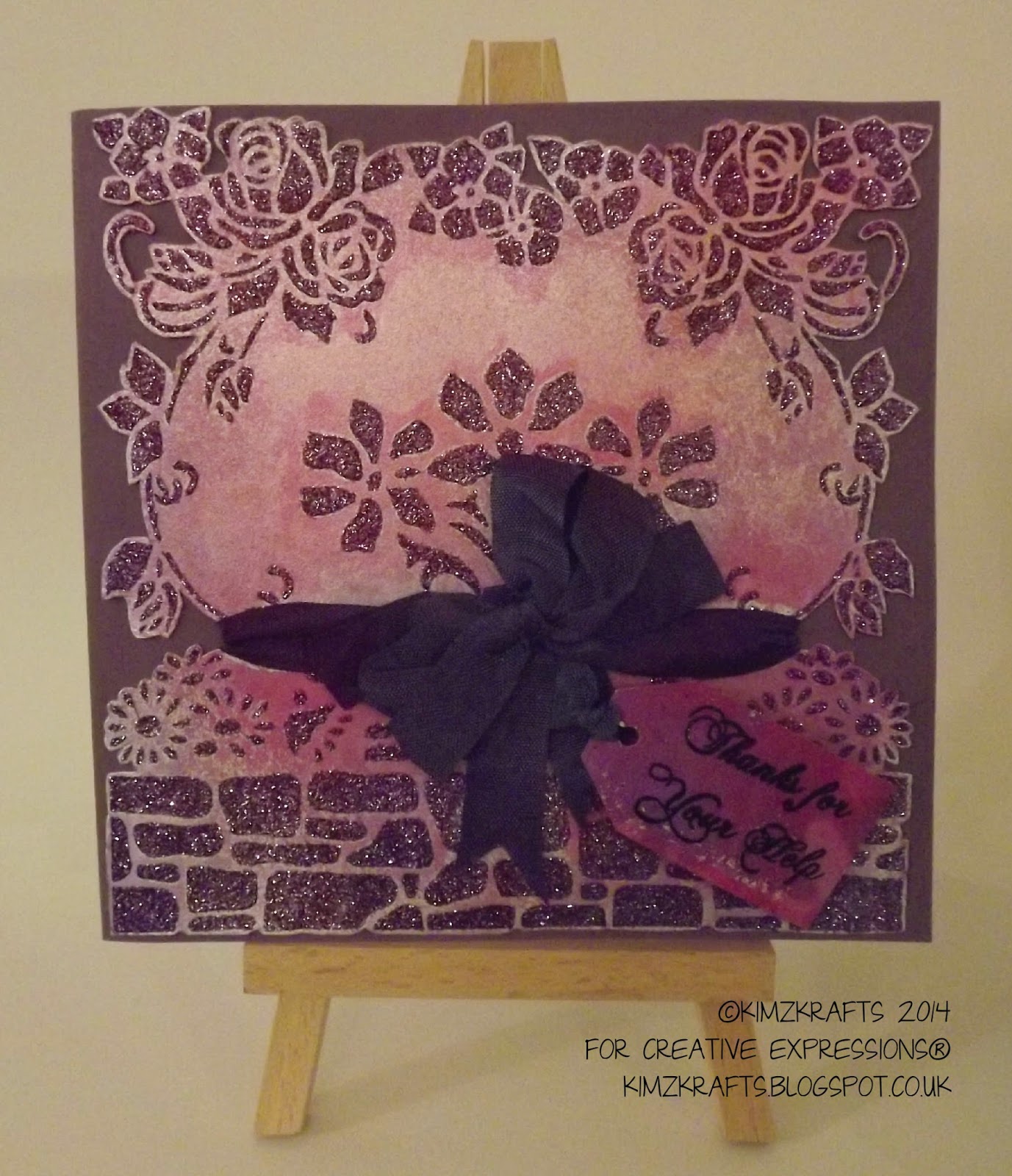 I tried to get a photo of just how glittery this Cosmic Shimmer Sparkle Texture paste is but the flash proved too intense. Here is a snippet just to give you an idea of the sheer glittery-ness of it.

I used a group of colours to do the main stencil image, Vivid Violet, Lavender Mist and Rich Plum. The mask I used was Flower Garden. Tape the mask onto the card with low tack tape. Make sure it is flat to the card.

It was simply a case of spreading the glittery paste on to the stencil with a palette knife. I used a 'blob' (technical term) of each colour rather than using one colour only. Any excess can be scraped back into the pot or, if you are mixing like I was, then scrape the excess into a separate pot. Nothing is wasted. The mask was then removed. Take the mask off as carefully as possible so as not to drag any of the paste. Allow to dry. Patience is not my strong point but I did my paste spreading the day before so I knew it would be 100% dry. Nothing worse than finding a tacky bit because you haven't waited long enough for it to dry! I would say that a minimum of 4 hours depending on the air conditions.

I had used white card as my base but fancied colouring this up a bit so used a couple of Cosmic Shimmer Ink Spray Misters in Grape Crush and Paradise Pink. I dabbed off the excess ink mainly because I wanted to get on with the project, but also to add some interest to the background, It gave a subtle marble effect. 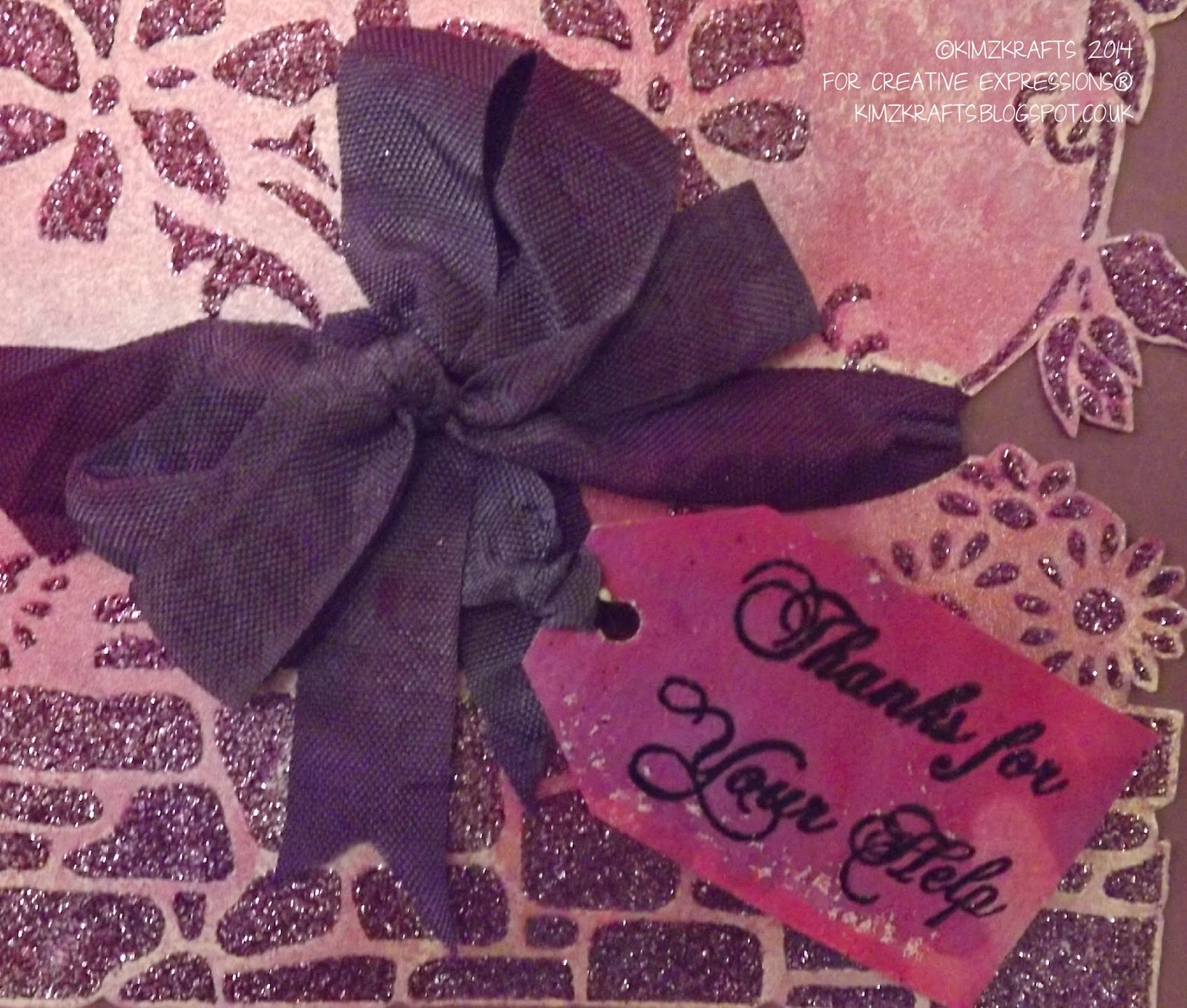 Then on to some fussy cutting, This particular image was good for this as there were only 2 places where the cutting wouldn't work and I used those places to sit the ribbon in! I spritzed the ribbon with the inks to match. The feature was then mounted onto a card blank and a tag made using an off cut and one of the sentiment stamps.

You could easily make a card topper with just the mask and glitter paste but I couldn't resist some fussy cutting and ribbon adornment!

Right, I need to crack on. Would you believe I STILL have boxes to unpack! Makes you wonder whether the things still in the boxes are actually things I need?

Have a great week and see you again next Monday for another adventure with Creative Expressions.

Posted by KimzKrafts at 09:28
Email ThisBlogThis!Share to TwitterShare to FacebookShare to Pinterest
Labels: Creative Expressions